Kind of sexy, huh?  It’s the first recorded meal.  “And she took, and she did eat, and she gave” (Genesis 3.6).  The image in the picture, and in much art is that it was an apple.  One of my favorite Aerosmith songs is ‘Adam’s Apple.’  In that oldie but goodie, Steven Tyler belts out:

‘conscience was related
man he was created
lady luck took him by surprise
a sweet and bitter fruit
it surely opened his eyes
well she ate it
lordy it was love at first bite
well she ate it
never knowin wrong from right.’

The fact is, and has been noted several times, we do not know what the fruit was, what it looked like (it was shiny).  But, the image stuck.  It seems that we got the idea of an apple from a second century Jewish translator-turned-Christian (blame the Jews) named, Aquila Ponticus.  It’s harmless.  It’s been used to show people that what they ‘think’ is ‘in’ the Bible, isn’t.

Another misconception (I am going to cover three of them), is that of a talking snake.  How many times have we heard that only a moron would take it literal that Eve was talking to a dad-gum snake.  I mean, come on, people! 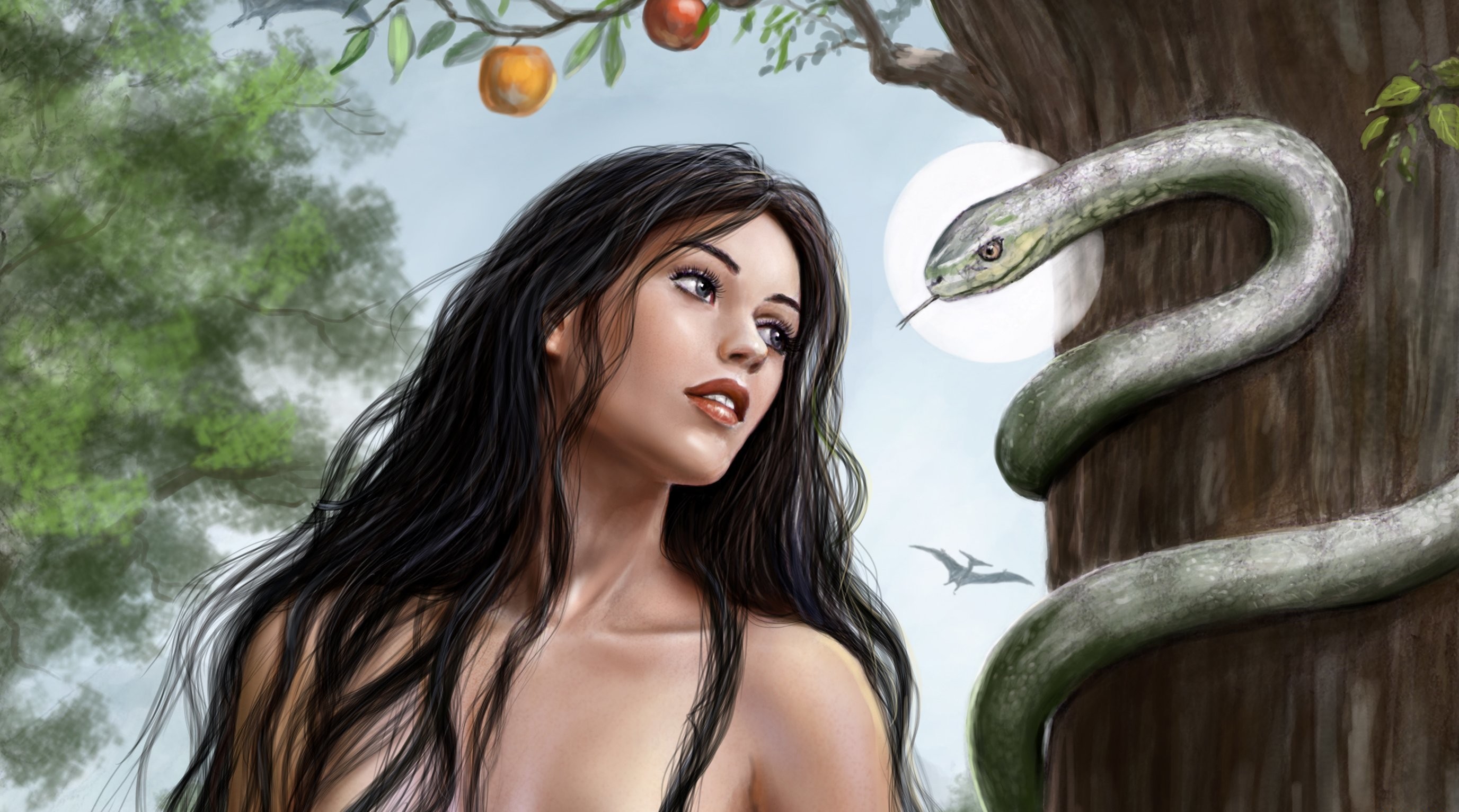 More sexiness and naughty bits.  I suppose a better picture than this:

I don’t know.  Regardless, this image is very popular.  We see the word, “serpent” in Hebrew and think, “snake.”  More Steven Tyler:

‘even Eve in Eden
voices tried deceiving
with lies that showed the lady the way
at first she stopped turned and tried to walk away
man he was believer
lady was deceiver
so the story goes but you see
that snake was he
she just climbed right up his tree.’

Well, let’s look at the text: “Now the serpent was more crafty than any other wild animal that the LORD God had made” (Genesis 3.1).  The word in Hebrew for “serpent” is, indeed, used for what we call, “snake” (nachash).  Ophis is the Greek word, which has a long history in mythopoeic tales in the Ancient world.  Yep.  It’s a snake.  From this we move on.  But, I was taught better.  Something’s not right.  A snake is a creature made in Genesis 1.25 says, “And God maketh the wild animal of the earth after its kind, and the cattle after their kind, and every creeping thing of the ground after its kind.”  In the Greek, the term for “creeping thing” is “reptile”.  It’s not a cow.  Psalm 148.10 says, “The wild beast, and all cattle, Creeping thing, and winged bird” (numerous examples can be shown).  The point is, a “creeping thing” is so because it “creeps upon the dirt” – on its belly.  It’s not a “beast” or “wild animal.

Now, let’s read the text again: “Now the serpent was more crafty than any other wild animal that the LORD God had made.”  The Hebrew text is literal here: The serpent.  Not serpents.  Not a serpent, but the serpent.  It was not a “creeping thing that creeps upon the ground” and made to “produce after its own kind” like snakes and lizards.  This particular serpent was a beast.  It was “more crafty” from all the other beasts the LORD God made.  There was only one of them.  God made him.  He was crafty.  He had no mate.  He was not a snake.  He was not a cow.  We don’t know what the heck he was, but we for sure know that he wasn’t a dad-gum snake!  If evolutionists can believe in talking (grunts) of a chance organism-becomes-hominid, then I don’t have much of a problem with a certain creature, a unique creature, that could talk.  I do have a problem with a “talking snake”.

But, check this out.  After this serpent-beast thing does what it does, God curses it: “And Jehovah God saith unto the serpent, ‘Because thou hast done this, cursed art thou above all the cattle, and above every beast of the field: on thy belly dost thou go, and dust thou dost eat, all days of thy life.”  Now, some think that here this beast (again, not a snake) is made to become a snake, and is the reason we have snakes today.  Well, no.  But, this serpent-beast is made to go on its belly; it’s reduced to one of the creeping things that creepeth along the dirt.  That does not make it a snake.  Second, all the other beasts, cattle, livestock, animals, creeping things, birds, seeds, whatever, are made to reproduce after their own kind with their own kind.  This beast, however, has no mate.  It was a unique and crafty beast (singular) “from all the beasts” (plural) God made.  There was no female counterpart.  When this thing died, that was it (“all the days of your life”).

Finally, one last false image from Genesis 3 must be smashed.  Eve was not made from the rib of Adam.

The Hebrew text, again, simply says, “Then the Lord God cast a deep sleep upon Adam: and when he was fast asleep, he took one of his sides, and filled (closed up?) up flesh underneath it.”  Now, yes, the Hebrew here can mean a rib.  Hopefully one seasoned with this: 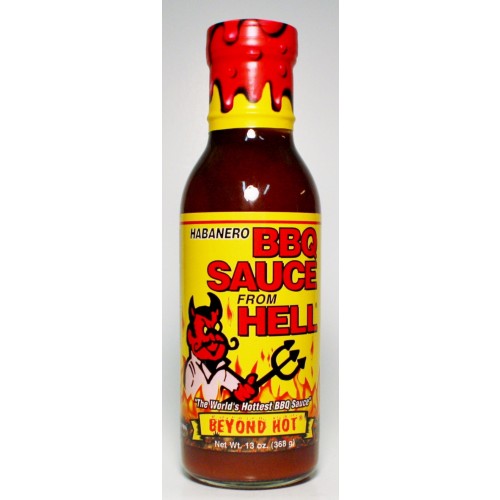 It’s actually a beautiful image.  God made a man, and from that man made a woman (same identity, same substance, made in the same image).  I mean, God made Adam from dirt, does that mean dirt rule over Adam?  Hardly.  Then neither should it imply that woman being made from man means man is over the woman intrinsically speaking.  The woman was made from what God “took” (what he “took” was his “side” – something inside because Adam’s flesh (sarx) had to be “closed up”.  Maybe this is where we must get in touch with our inner-femininity comes from….I’ll stop.

The point of all of this is that images tend to add to the actual text.  When we try to imagine Man and Woman in a garden, we only have our own settings to do this.  When we image one of our ribs, and throw in an apple and a talking snake, the picture starts looking, well, rather ridiculous.  And that’s exactly the kind of thing doubters do to this historical account of our origins.  The fact is, we have a text.  I don’t know what Adam and Eve looked like.  How tall they were.  I don’t know what language they spoke.  I have no clue what the crafty beast-serpent looked like, either.  I have no idea what kind of “fruit” they ate.  I do not have any idea whatsoever what the Garden looked like, or how the topography was, the atmosphere, etc.  I can use my imagination based on how I perceive “garden” “fruit” “man” and “woman” today, and then use that to construct what those things sort of, maybe, possibly were.  But, my mental picture (image) is just that: an image, not reality.  I wasn’t there.  It’s going to be blurred to some extent.  I have no idea what the first animals, beasts, fish etc., looked like.  I suppose, to some degree at least, a dog is a dog.  But, the first pair of caninae, the sub family of canidae?

Yeah, I have a problem with talking snakes, and a rib for woman, and an apple tree (I like apples!).  I don’t have a problem with Genesis, however, as an explanatory non-fiction source of ultimate origins of all that we see.  I have a problem with looking at my dog, A.J. and thinking, “God made him.”  Well, no.  Not directly.  A.J. is a spin off from a spin off from thousands of years of spin offs from what we “label” or “categorize” canidae (a Latin term for “of the dog” that someone, somewhere, used when naming that thing somewhere at some point in time – just like Adam did when he arbitrarily “picked” names for things).  Why not call a dog a “booboozambick”?  Oh, sorry, it’s not Latin….it’s not scientifically correct.  Okay, canine it is.  Whatever.  I’ll take the imposed term (imposed by who?).  I mean, we got to call it something, right?  Anyhow, it’s late.